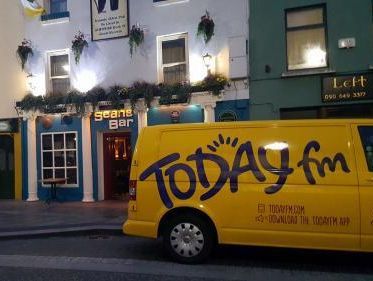 Sean's bar was delighted to host Today FM's Dermot & Dave show on Friday April 7th. The comedic duo were in Athlone as part of their national tour.

On the show the pair discussed various topics surrounding Sean's, from the original Innkeeper Luain who set up the pub in 900 AD, to the walls made of Wattle and Wicker discovered during renovations in 1968 and also talked about some of the many famous people to have set foot in Sean's which included Dallas stars Larry Hagman & Linda Gray, Ray Meagher,aka Alf Stewart from Home and Away and singing sensation Nathan Carter to name just a few. On the show Dermot recalled his visit to the pub many years previous which included a lock in and a sword fight in the wee hours of the morning!!

The lads were joined in Sean's bar by comedian and BBC radio DJ Phil Jupitus. Funny man Jupitus is best known for his appearances on BBC Two's popular music quiz Never Mind the Buzzcocks from its inception in 1996 to 2015. He also appeared on several other panel shows including QI and BBC Radio four's I'm Sorry I Haven't a Clue.

From 11am to 12pm a live audience was brought in for the last hour which created a wonderful atmosphere both in the bar and for those listening at home. Those in attendance were in for a real treat as Donegal band Little Hours performed their latest hit single which was one of the highlights of the show.

If you missed the show you can still listen to the broadcast by logging on to www.todayfm.ie and going to their podcast section.