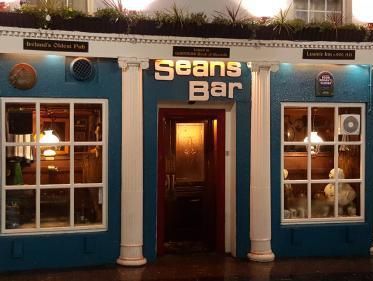 A Pub Born in the Dark Ages

Sean's Bar has welcomed travel writers from all around the world over the past few decades, from the Lonely Planet to Business Insider.

Each of these visitors take away with them a favourite memory of the World's Oldest Pub.. "the sawdust covered floors... the open turf fireplace.. the live traditional music.. the old walls covered in ancient artefacts". The one thing which they all agree on is that Sean's Bar is a unique bar with an amazing history attached to it. The following is an extract published on the BBC Website in March 2019 by Mike MacEacheran as he stopped by to chat to us and experience the hospitality at Sean's Bar.

Shortly after the working day begins, a hush falls over the streets of Athlone in Ireland’s County Westmeath. Away from the banks, hotels and shopping centres, buses empty out, commuters dip from sight and moored barges and skiffs on the River Shannon are at standstill as the dark, silted water flows past.
But across the town’s arched stone bridge, in an unassuming building on the river’s west bank, a 50-year-old barman named Timmy Donovan is already pulling his first pint of the day at Sean’s Bar – and a buzz is starting to build.

When the pub closes after midnight, the pitted fireplace will have crackled since mid-morning, and scores of pints of creamy-headed stout – and as many drams of whiskey and cups of Irish coffee – will have been poured. Just as barkeepers at the dimly lit pub have done with more rudimentary forms of alcohol such as mead for the past 1,100 years.

Sean’s Bar in Athlone, Ireland, has been serving drinks for the past 1,100 years (Credit: Mike MacEacheran)

Sean’s Bar, with its woodchip-covered floor and walls made of wattle and wicker interwoven with horse hair and clay, has been in business since the Dark Ages. Located near to the ruins of a 12th-Century Norman Castle, it is the oldest extant public house in Ireland, a claim officially certified by Guinness World Records in 2004. But many, including the current owners and plenty of Athlone regulars and respected Irish historians, also believe it to be the oldest in the world.

“Just imagine how much history this place has seen,” Donovan said, gazing out across the low-ceilinged bar beyond the morning’s first trickle of customers. “I’ve been researching our history for 30-odd years and no other pub comes close.”
When you walk in, you can feel the history and the romance straight away
Europe’s other most storied pubs – Leeds’ The Bingley Arms (953), Abergavenny’s The Skirrid Mountain Inn (1110), Nottingham’s Ye Olde Trip to Jerusalem (circa 1189) and Dublin’s Brazen Head(1198) – all have claims on the title of the world’s oldest continuously run pub. Others, too, maintain historical, if hazy, back stories as murky as any pint of Guinness.

But according to archaeological research conducted and verified by the National Museum of Ireland, Sean’s Bar dates further back than them all: to 900AD. This predates the defeat and decline of the Vikings in Ireland. The Anglo-Norman conquest of Ireland. And the creation of whiskey and black beer themselves, with which the Emerald Isle’s pubs have become synonymous. Combined with the carbon-dated material – including bits of mud, wood and wattle – and the presence of ‘tavern tokens’ found on the site (now on display in the National Museum of Ireland), the sense in Ireland is that Sean’s Bar is very much worthy of the legend.

“When you walk in, you can feel the history and the romance straight away,” bar manager Declan Delaney said, pulling pints of stout for another group of thirsty arrivals. “This is the genuine article. There has been many owners and short-term tenants over the years, but the principals remain the same. It’s got to have ‘caint, ceol, agus craic’ – chat, music and craic. That’s what makes it authentic.”