As Ireland’s oldest pub and with over a thousand years of history, we have crafted own unique blend of grain and malt whiskey, matured over time in bourbon casks. Specially blended, this limited edition Irish whiskey is produced to the highest quality and with its distinctive flavour will delight the palate and warm the spirit.

This whiskey is dedicated to ‘Luain’, the very first Inn Keeper at Sean’s bar. Luain guided people across the treacherous waters of the ancient ford and this crossing point and pub date back to 900 A.D. Later a settlement was established around this strategic crossing point where King Turlough O’Connor built the first wooden castle in 1129. Today the town of Athlone, or átha Luain in Irish, takes its name from Luain himself and the pub the town was built around. 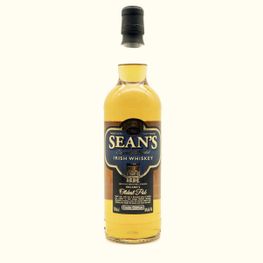 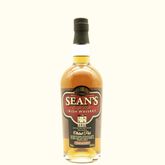 Sean’s Bar Single Malt whiskey ‘Clonmacnoise’, released first in 2018, is a tribute to the monks in these monasteries who developed and perfected the art of distillation over the centuries. It was these monks who coined the phrase Aqua Vitae or Uisce Beatha as it became known later and who also in the annals of Clonmacnoise recorded the first ever mention of whiskey.

The History of Whiskey began right here in the Midlands

Sean’s Bar is located in the heart of Ireland, situated in Athlone on the banks of the River Shannon, south of Lough Ree, and north of the ancient monastic monastery at Clonmacnoise. This region spanning the four counties of Longford, Westmeath, Roscommon, and Offaly is steeped in history where the origins of Whiskey can be traced back to.

It is known that the art of distillation was brought to Ireland by Irish missionaries from the Mediterranean regions between 500 – 600 A.D. Distilling, like most of the early sciences, came from the East. Its first European practice was in Spain, introduced by the Moors in the Middle Ages. Perfumes and aromatics were being distilled long before potable spirits.

The much-travelled Irish monks brought the secrets of “Uisce Beatha” back to Ireland and to their monasteries where distilling of alcohol began. Their main monasteries were located on Lough Ree at Inchcleraun, and further down the river to Clonmacnoise. The first Christian monastery on Inchcleraun founded by Diarmaid has been dated by historians to 540 A.D. Its earliest years are highlighted by the memory of its most illustrious son Ciaran Mac an tSaoire, who studied under Diarmaid at Inchcleraun and went on to found the monastery of Inis Aingin or Hare Island which is also located on Lough Ree. In due course he followed the river southwards and founded the great monastery of Clonmacnoise in 549 A.D. The monks perfected the art of distillation and in fact the art of producing Uisce Beatha remained the preserve of the religious for hundreds of years.

It is known that the earliest recorded mention of whiskey anywhere in the world comes from the Annals of Clonmacnoise in 1405 A.D describing the death of Richard Magranell, Chieftain of Moyntyreolas at Christmas from ‘taking a surfeit of Aqua Vitae’.

The story of whiskey continues further up the mighty River Shannon to the Peninsula at Rindoon, located on Lough Ree where the army of King Henry ii was located. Having sampled the delights of the native Uisce Beatha in the region it is known that this army coined the name ‘Whiskey’ as they had problems pronouncing the old Gaelic name. King Henry's grandson, King Henry iii later built a castle at Rindoon.

It is our location in the heart of this region and its rich history taking us back to the origin of whiskey which has inspired us to launch our very own. Distilled and bottled by West Cork Distillers, each of our labels tells a different story.