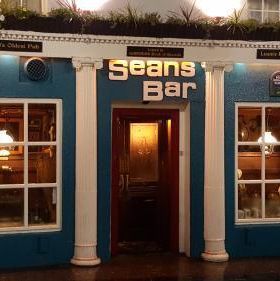 Sean's Bar was formally known as " The Three Blackamoor Heads" and undoubtedly the most famous proprietor of the pub was Mark Begg who held the Inn in 1736. Mr Begg inaugurated the first stage coach service from Athlone to Dublin.

We learn from contemporary advertisement that Mark Begg began the first stage coach service on Monday 8th November 1736. It was reported that he operated " a right good service" from the Three BlackMoor Heads" (Sean's Bar) to Capel Street, Dublin setting out from Athlone each Monday and returning on Thursday from Dublin. Each passanger paid 10s and 10d with additional charges of a penny per pound for baggage exceeding 20lbs weight (a policy later copied by airlines including Ryanair the largest in Euope which is lead by another Westmeath man!!)  Mark Begg and his wife Margaret are buried in the Abbey Graveyard where their tombstone is both large and ornate.

During the term of Mark Beggs proprietorship The Three Balckamoor Heads became a well established Inn. It was here that all gatherings of the millitary and elite of the town were held. It was here too that victories were celebrated. In a newspaper account dated 5th July, 1743 we read: "We hear from Athlone that on Sunday last after they received the news of his majesty's glorious victory in Germany the Hon. (in what became known as the Battle of Dettingen.  The British forces, in alliance with those of Hanover and Hesse, defeated a French army under the duc de Noailles. George II commanded his troops in the battle, and this marked the last time a British monarch personally led his troops on the field).  Thomas Darby who commands a troop of Dragoons in that Corporation marched his troops into the streets about 2 o'clock at night, at which time the post came in, and fired three volleys which were answered by the millitary of the Corporation, the town was immediately illuminated and bonfires erected in several parts of the town but it was too late for the bells to be rung and to drink the health requisite upon the occasion... the next day.. several of the toasts were drunk by the Corporation in general, all of whom assembled together at "The Three Blackamoor  on the occasion". Mark Begg was succeeded by his widow Margaret and his son James