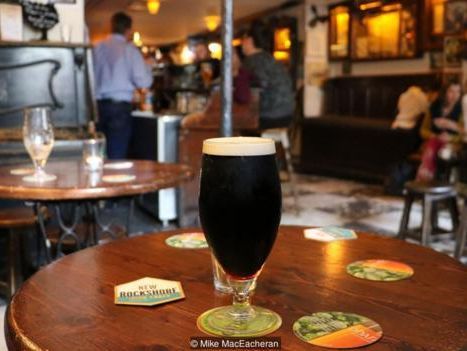 In his classic novel Ulysses, Irish author James Joyce wrote that a ‘good puzzle would be to cross Dublin without finding a pub’, and today his homeland’s geography is the equal to this conundrum. Every town is marked by a storied drinking saloon, where the sounds of a crackling fire, tuned guitar and clinking glasses thrum like a pulse beneath the hubbub of chatter.

Sean’s Bar is no exception. There’s the unmistakable smell of hops and barley. The lighting that’s not too bright, but warm enough to block out a dark night or indeed morning. There’s the glow of the fire. The nooks and crannies of snugly fitting seats. The walls and wooden beams covered with memorabilia, maps, letters, poems and nautical charts. In such a place, storytelling is indivisible from hospitality. Conviviality and hospitality are deeply embedded in Irish culture and have found their best expression in public drinking. But those pubs with history ingrained in their warp and weft are a dying breed. The most recent statistics from the Drinks Industry Group of Ireland show the number of pubs across Ireland have been closing at a rate of more than two a week for more than a decade because of the lingering Irish recession, an increase in alcohol excise tax and growing awareness of health concerns. Since 2005, last orders have been called at nearly 1,500 alehouses.

“There are so many ‘plastic Paddy pubs’ without the history, but Ireland is full of great pubs, if you know where to look,” said Kevin Martin, author of Have Ye No Homes To Go To?: The History of the Irish Pub, who himself has completed a master's degree thesis on the subject. “What is key is the conviviality – and the promise of hospitality. It’s just one of those perfect matches. Conviviality and hospitality are deeply embedded in Irish culture and have found their best expression in public drinking. Unfortunately, Irish pubs are just another commodity now, but you can sense the history at Sean’s Bar. It’s their careful maintenance of that heritage that’s been their trump card.”

As for Sean’s Bar’s petition to be the world’s oldest pub, an authority like Martin sees no reason why the claim isn’t valid, based on what’s known. “As you can imagine, it’s highly contestable territory and science, and nobody is going to swear on it,” Martin said, whose next book on the history and folklore of Irish pubs will be published this St Patrick’s Day. “Apart from anything else, there were no licensing laws at that time.”

No-one knows exactly when the first stone at Sean’s Bar was laid, but they do know that Athlone’s historical saloon is intrinsically bound to the lore of one place in particular: Ireland’s most legendary river, the Shannon. The site of Luain’s Inn (as it was first called) was chosen by a former innkeeper called Luain Mac Luighdeach, who used a bend of the river to safely guide people across the water between serving flagons of mead. A central axis of medieval Irish life, the river was a strategic point not only as an important waterway for monastic trade, but it helped spread Viking influence around the country and acted as a geographical boundary between east and west during later military campaigns. Even when the Shannon was in spate, pilgrims could be found at the back door of Luain’s Inn trying to ford the fast-flowing rapids.

In fact, there was little other choice. To the north, the landscape gets progressively more challenging, with the waters of Lough Ree (‘the Lake of Kings’) spilling out across an enormous water basin some 29km long and 12km wide. To the south, the Shannon widens and deepens, creating an even more treacherous journey. In recognition of this, the site of the inn became known by the barkeeper’s name – Athlone, or ‘Ath Luain’, the Ford of Luain – and today the alehouse is one of the few premises in Ireland with a preservation order in place for both inside and outside.

When Donovan first arrived at the bar as a young boy with his parents 32 years ago, the first thing that struck him was this relationship with the river, as well as its slanted checkerboard floor. Quite blatantly, it slopes towards the river, as gravity was the only plumbing available when the river flooded during the inn’s golden era. Wood shavings placed on the floor, once used to soak up excess water, nowadays absorb spilled beer.
Everybody brings a little happiness to this place
Little has changed in the bar over the last three decades, but Donovan certainly has. He has worked his way up from barman to owner and back again (the pub is currently owned by a silent partner), and yet still feels drawn to the pub’s history. When he retires, he said, he’ll find a stool and pass time at the bar with Delaney. “Everybody brings a little happiness to this place,” he joked, getting a little misty-eyed. “Some by coming in and some by going out.”

Research is ongoing at Sean’s Bar into claiming the official title of the world’s oldest pub, but in the meantime there’s plenty of other conversations to be had. Seasons shift and tastes change, but for the locals living along the banks of the Shannon, on the spot where Luain once made his great ford, the drink will flow, and there’ll always be a warm welcome.